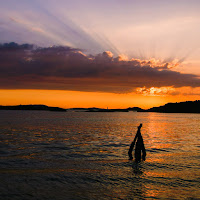 So, the first few days of my sleep cycle experiment has passed, and I thought to share a few experiences so far.


First of all, I do the mornings slightly different. The recommendation is to set your alarm for 5 or 5:30 in the morning, and get up immediately when it goes off (no snoozing!). But during my student days, trying to combine some early morning lectures with late night hackathons, I grew an interest in sleep cycles. It turns out that for some people, it is easier to wake up and get moving if you happen to be alerted during the period of your sleep when you are in a light sleep phase, or REM sleep. I happened to be one of them, and I managed to find the length of my sleep cycle, meaning that when I grew tired, I could set the alarm to wake me approximately during a light sleep period.

In the mid 2000s, products that utilized this mechanism such as alarm clocks that measure your body movement during night started to appear. I've been using one for close to 10 years, and I use it for this experiment as well, so I basically set the alarm for 5:30 meaning that the clock is allowed to try waking me up from 5 o' clock and during half an hour. If it can't find a "good" waking opportunity (i.e. detecting movement from me) it finally gives off a strong alarm signal at the very last minute, in sharp contrast to the soft and careful signals it uses otherwise.

The first morning I had to get up to the "final call". I felt like I had had a good night's sleep, and went about the day without any problems. In the evening, I'm supposed to take a 60-90 minute nap whenever it feels appropriate. I hit the couch at around half past seven, and remember lying on my back, thinking "I won't be able to sleep this way". The next thing I remember, I was startled by neighbors slamming a door, and I had slept for an hour!

After that, I was energized, and went on working with some of my book translations until just past midnight.

The second morning was also without drama, although I again had to endure being scared awake by the "emergency alarm" of my aXbo clock. I had very good energy during the entire morning and worked through the journey to work. This day presented a slight challenge though, as I had a dinner appointment with a good friend later the same day. Realizing I wouldn't find the opportunity to nap, I tried to get some sleep during my train ride home in the late afternoon. But as it would turn out, trains do not provide the best environment for a sound nap.

And of course, this threw me a bit off my schedule...
creativity lifehack